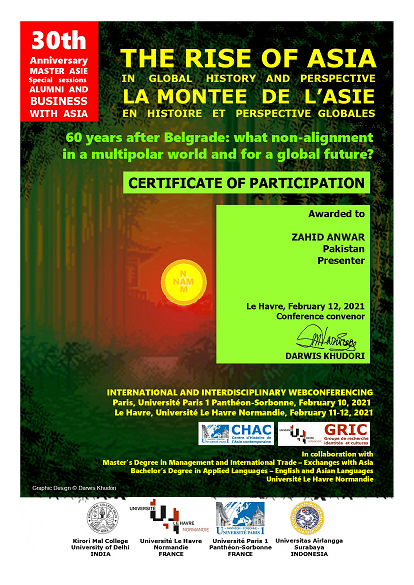 An International online Conference on, “THE RISE OF ASIA IN GLOBAL HISTORY & PERSPECTIVE:: 60 YEARS AFTER THE BELGRADE  WHAT  THE NON-ALIGNMENT IN A MULTI-POLAR WORLD AND GLOBAL FUTURE? “ by GRIC, University of Le Havre, France on February 10-12, 2021. Prof Dr. Zahid Anwar, Director, China Study Center, University of Peshawar presented his paper on, “PAKISTAN`S INSTRUMENTAL ROLE IN NON-ALIGNED MOVEMENT”. Prof Anwar said that non Aligned Movement (NAM) came into existence when the world was divided into two political blocs. It provided space to developing countries for exposure. The NAM was founded in 1961 on the foundation of the 10 principles devised in Bandung conference in 1955. These principles inspired developing nations to struggle for politico-economic independence. The NAM stood against colonialism, racial discrimination, hegemony, occupation, interference, exploitation, foreign aggression, imperialism, domination and bloc politics. The afro-Asian societies faced all these problems in one way or the other.  NAM became voice of the economically underdeveloped and marginalized Global South. It stood for South-South Cooperation and considered economic underdevelopment and social injustices threat to peace and security. NAM supports sustainable development and MDGs.  It considers debt burden, globalization,, lack of democratic decision-making in global political and economic order, unfair trade practices, decline in foreign aid and donor conditionality obstacles in the development of NAM members. NAM stands for cultural diversity and universality of human rights. Pakistan played an active role in NAM since its very inception and became its member in 1979 in its Havana Summit. The Bandung Conference brought Pakistan and China near each other and provided basis for the all-weather friendship between the two countries.  Pakistan fully supported the NAM on peaceful settlement of disputes, nuclear issue, expansion of UN Security Council, terrorism, self-determination and economic issues. To find its due niche NAM members require forging closer trade links and galvanizing cooperation among them. The NAM members are rich in natural and human resources, skills, talent, skills and also have the necessary technological base and an unparalleled market of their own. Harnessing their own resources and capitalizing on their overall potential will help a lot these developing countries and members of the NAM. South Asia is an important region of Asia nevertheless, it is victim of poverty and violence due to unresolved disputes and unaddressed historical grievances. NAM stands for cherished principles agreed upon in Bandung Conference and irrespective of the fact whether the world is bipolar or unipolar or multipolar the NAM struggle for its achieving its goals  will be a worth appreciation effort. This very important and successful event was organized by Prof Dr Darwis KHUDORI and his team. Prof Khudori is currently Directeur, Master Echanges avec l’Asie, Université Le Havre Normandie, France

CHINA EMBASSY SCHOLARSHIP 2021 FOR DESERVING STUDENTS OF UNIVERSITY OF PESHAWAR

75th Independence Day Celebrations of the Islamic Republic of Pakistan