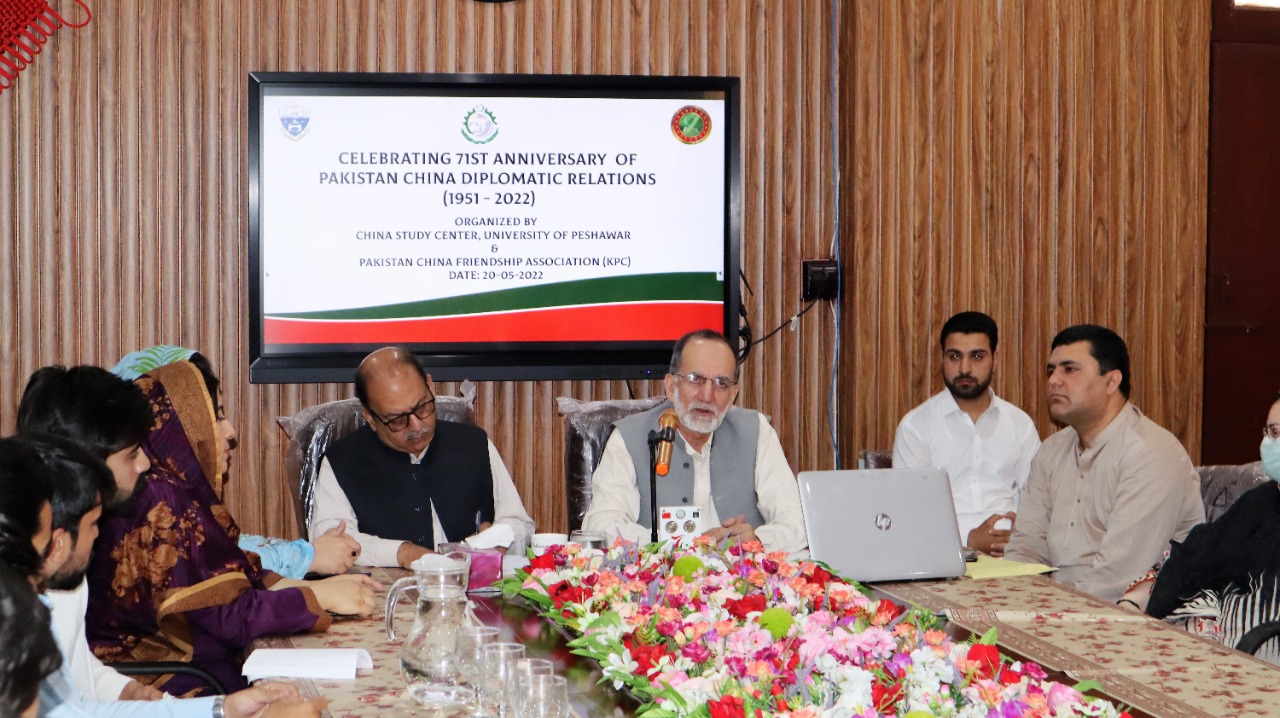 While addressing the seminar as Chief Guest Prof Dr. Zahid Anwar highlighted Pakistan is an important country in the region. Pakistan and China enjoy close friendly relations since the establishment of diplomatic relations in May 1951. Today we are celebrating the 71st anniversary of Pakistan and China relations. With the official launch of the China-Pakistan Economic Corridor (CPEC), the bilateral relationship has been elevated to a higher level. Today for Pakistan, the CPEC is forming its economic model through cooperation in infrastructure development, energy, science and technology, agriculture, and more importantly social-economic development.

Dr. Saima said that Pakistan’s location is strategically very important. Pakatan and China have convergence of interests on regional development and progress. and both the countries’ relationship is based on mutual trust and a win-win model

Dr. Kashif Saeed talk about China Pakistan diplomatic relations, and he focused on the development of China Pakistan Economic Corridor (CPEC). He said the special economic zones in Pakistan under CPEC can change the destiny of Pakistan. He also said that Rashakai Special Economic Zones which is part of CPEC can uplift the economy of Pakistan, particularly Khyber Pakhtunkhwa province. The SEZs will help in creating jobs and will facilitate the local firms.

Ms. Sumera Farid said that besides economic, political, and infrastructure development China and Pakistan are also working for social development of the people. She mentioned that investment on the people is the need of the day and we hope that Pakistan and China will collaborate and will invest more on people’s welfare and development.

Syed Ali Nawaz Gilani who was the guest speaker talked about the historical evolution of Pakistan and China relations. He stated that Chinese Prime Minister Zhou Enlai first visited Peshawar in 1956. He said that China helped Pakistan on many occasions. With the launch of the Belt and Road Initiative (BRI) and CPEC, the relations between both countries became stronger. He said that Peshawar was declared a sister city with Urumqi, China in 1985, and Kashgar and Abbottabad were declared a sister cities in 2007. The relations between Pakistan and China today are at a high peak and we expect that both the countries will continue supporting each other and will work for the progress of the people.

A one-minute silence was observed in respect of Chinese teachers who were targeted in a terrorist attack in Karachi.

At the end of the seminar cake cutting ceremony was held to “Celebrating the 71st Anniversary of Pakistan China Diplomatic Relations 1951-2022.

The seminar was ended by a vote of thanks by Prof Dr. Zahid Anwar. He thanked the Secretary-general of Pakistan China Friendship Association (KP) Syed Ali Nawaz Gilani, faculty members, researchers, and students for their participation in the seminar