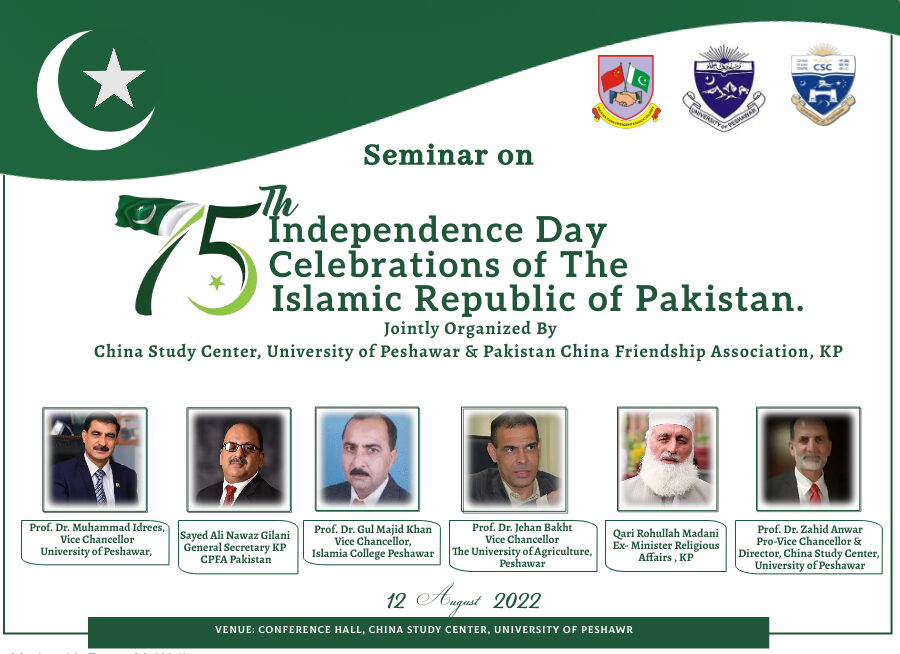 Prof. Dr. Zahid Anwar, Pro Vice-Chancellor and Director China Study Center, University of Peshawar welcomed all the distinguished guests, faculty members, scholars, academicians, and students to the Seminar. He said that the history of the Muslim struggle under United India is a clear testimony to the fact that the struggle of the Muslims is the real desire of the Muslims for a real and independent state. Given the enormous degree of challenges ahead, the things we need are unity, discipline, and faith. We must preserve and propagate national unity and social cohesion. We are the victim of 5th Generation war, and we should counter propaganda that weaken our national integration. he added

Syed Nawaz Ali Gillani, Secretary-General PCFA Khyber Chapter said that since Pakistan’s independence it has had a very good relationship with all the countries around the globe. On this auspicious occasion, when Pakistan is celebrating the 75th anniversary of its independence we should not forget those who sacrifice for the creation of Pakistan. This is high time that keeping in view the ground realities in the region and globally we should maximize our efforts for socio economic prosperity by strengthening our economic development activities in all walk of life and our Iron Brother and time tested friend China is excellent example as lesson to learn.

Prof Dr. Gul Majid Khan, Vice Chancellor Islamia College Peshawar enlightened the audience with the history of the Pakistan movement and said that we got independence due to the tireless efforts of our elders. Quaid e Azam Muhammad Ali Jinnah and Allama Muhammad Iqbal along with other people have made it possible to get independence from the British colonialism.

Prof. Dr. Jehan Bakht Vice-chancellor, University of Agriculture Peshawar said that Pakistan is rich with many resources, four seasons, mountains, deserts, forests, rivers, and water bodies. We have to manage population, tackle the issues of climate change and mushrooming of housing societies.

Qari Rohullah Madani, Ex-Minister Religious Affairs KP, emphasized the historical evolution of Pakistan. He said that Pakistan came into being on the Islamic Ideology. And it was possible due to the efforts of our brave people who sacrificed their wealth, health, money, and homes. We need to follow the ideology upon which the country came into being. he added

Prof. Dr. Muhammad Idrees, Vice Chancellor University of Peshawar graced the event as a Chief Guest. In his speech he said that the 14th, August was the day when Pakistan came into existence.  And it is a matter of pleasure that we all are living freely in this part of the world in which Allah has gifted with many resources. It is due to the Allama Muhammad Iqbal’s efforts, the hard work of Quaid-e-Azam Muhammad Ali Jinnah, and countless sacrifices of other so many freedom fighter that we are free to breathe and live according to our principles, rules, cultures, and values.

He congratulated Prof Dr. Zahid Anwar on successfully organizing the seminar on the 75th Anniversary of the Islamic Republic of Pakistan.

Mr. Saifullah Khan, Registrar University of Peshawar in his vote of thanks speech threw lights on different aspects of Pakistan freedom movement and thanked all the participants of the seminar and hoped that China Study Center, University of Peshawar will organize more such useful events. At the end of seminar cake cutting ceremony took place followed by refreshment.

A large number of Chairpersons, Directors and students of the different departments of the University of Peshawar, Scholars, Researchers, experts, and Media personnel attended the seminar.