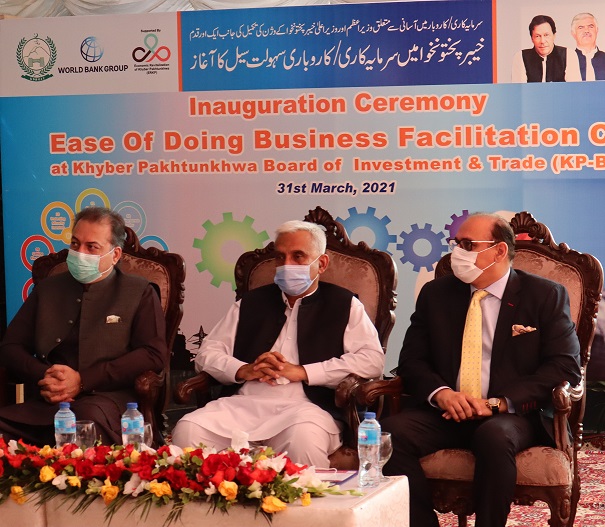 The provincial industries department on 31ST March, 2021 launched an investment and business facilitation cell for investors. Addressing the inaugural ceremony, CEO, KP Board of Investment Hassan Daud Butt highlighted the key features of the cell and termed it as a milestone in the economic development of the province.

Special Assistant to Chief Minister for Industries, Abdul Karim Khan (MPA, PK-45, Swabi III)  in his address said that the Government of Khyber Pakhtunkhwa is serious in addressing the problems of the investors. He elaborated the measures taken by the Government including  the new industrial policy which will facilitate investors and galvanize industrial development in the province.

In his online speech the finance minister, Taimur Jhagra said that the provincial government was taking measures to make Khyber Pakhtunkhwa an ideal investment destination for investors. Adviser to the chief minister on information technology Ziaullah Bangash said that a Government online business portal had also been set up to let the investors have direct access to the federal and provincial departments. The World Bank Group. Country Director, Najy Benhassine, addressed the occasion via video link and greeted KP-BOIT on setting up the cell and hoped that the right steps at the right time would encourage the investors and facilitate business activities in the province. He said that the bank would support the KP government in all stages of the initiative.

Javed Marwat, Secretary, Department of Industries in his speech  hoped that the representatives of industrialists and traders will benefit from the facilitation cell and underlined that gone are the days when terrorism wreaked havoc on the province, now the situation has become conducive for industrial development through investment. Being a political scientist, Mr Javed Marwat knew the regional ground realities and served as Political Agent in several FATA agencies during military operations there.