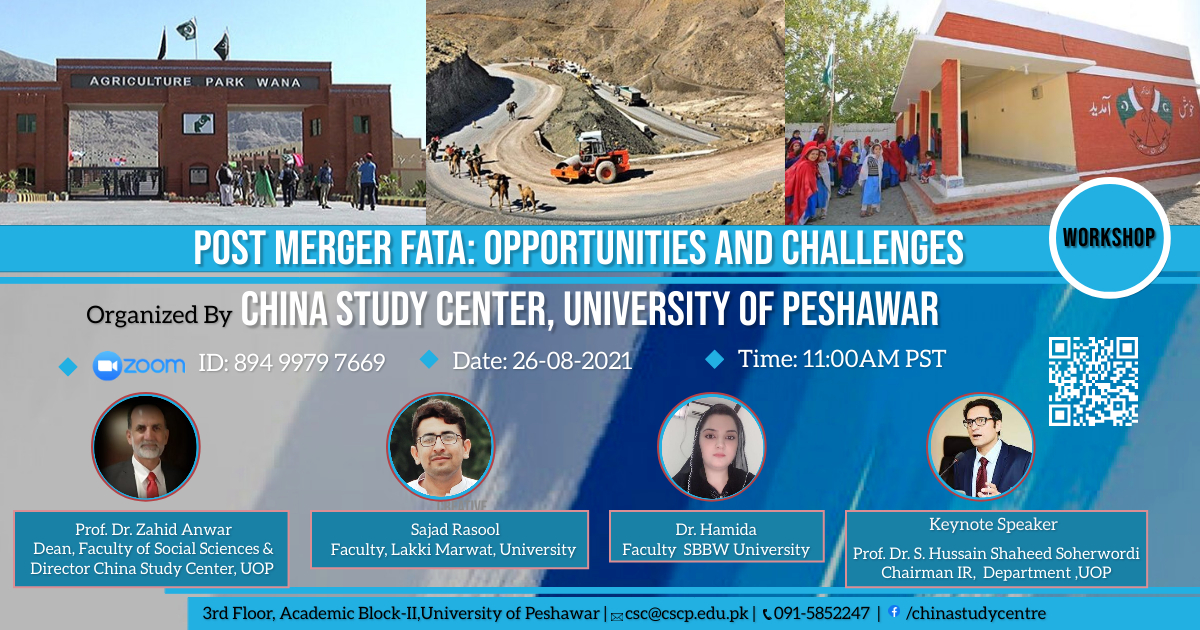 China Study Center, University of Peshawar organized an online workshop on “Post Merger FATA: Opportunities and Challenges” on 26th August 2021, at 11 am at the conference hall of the Center. A large number of students, researchers, and Scholars joined the workshop. Professor Dr. Zahid Anwar, Director China Study Center, and Dean Faculty of Social Sciences, University of Peshawar welcomed all the speakers and audience to the online workshop. Sajad Rasool from Lakki Marwat University, and Dr. Hamida from Shaheed Benazir Bhutto Women University, Peshawar delivered their speeches and shared their collected data on the theme under focus. .

Sajad Rasool: Government writ was strengthened as a result of Operation Zarb e Azb in 2015 and then the rehabilitation of the TDPs started at the end of 2015. Once the writ of the government was established it was easy now for the government to bring these areas into mainstream. Constitutionally these tribal areas were directly controlled by the federal government of Pakistan.  Article 246 and 247 of the 1973 Constitution of Pakistan was related to FATA affairs.  On May 24, 2018, Pakistan National Assembly approved the 25th Amendment in the 1973 Constitution. The recent merger of FATA into Khyber Pakhtunkhwa has the potential to bring political, economic, social, and cultural changes to the region of FATA as well as many opportunities for the residents of the region. Recently I have visited Mir Ali, Miranshah, and Razmak a month earlier. The infrastructure is developed. The roads are repaired. I saw schools, colleges and playground where children were playing football. Normal economic activitis have resumed. Big markets were built by the government and people were shopping there. There was rush in the Mirali and Miranshah bazars and many visitors like me were buying things there. According to the Assistant Commissioner of Bannu and Tourism Department of Khyber Pakhtunkhwa nearly 100,000 people visited Razmak on the occasions of Eid this year which is an encouraging situation for the people of Waziristan.

Dr Hamida: The long-awaited proposal of FATA merger was finalized through 25th amendment. I have been to Khyber, Mohmand and other areas of the merged districts and collected data for the proposed academic research. The following steps helped the local people to a great extent: The second year ADP increased, and new departments were introduced which increased economic opportunities. Health cards were introduced, student finance schemes, extension of regular court system, introduction of police, shohada packages, forest regulations, tourism department, Border markets, special Act passed for mine and minerals, sports stadium, cadet college, generation of revenue sources, army public schools and agricultural development.

Prof Dr. Zahid Anwar in his speech stated that the former FATA ( merged districts) are passing through a transitional stage. The government has taken solid steps and adopted measures to uplift social and economic problems. Many projects related to health; education, roads, infrastructure, and poverty eradication have been launched. After the merger and overall changes in the regional situation, there are prospects for the development of the post-merger FATA.

We should also keep in mind the China Pakistan Economic Corridor (CPEC) is covering the whole country from Torkham to Karachi. CPEC is helping in the agriculture and industrial sector. Mohmand Marble City is a project under CPEC. And it is said the more than 18 thousand people will get the jobs in this project. It will galvanize industrial development in the post-merger FATA.

Furthermore, he mentioned that the speeches give us a very optimistic picture of the emerging situation, and we hope that with the passage of time concerted efforts with a systematic approach to the issues of the area will take place. The people of the merged FATA were at the forefront in the war against terrorism.  They were in the line of fire, and they suffered a lot and were victims for the last 20 years. It is hoped that the people of the area will take a sigh of relief and their trauma will be healed by Government through different economic uplift projects.

At the end Professor Dr. Zahid Anwar thanked the audience for participating in the workshop