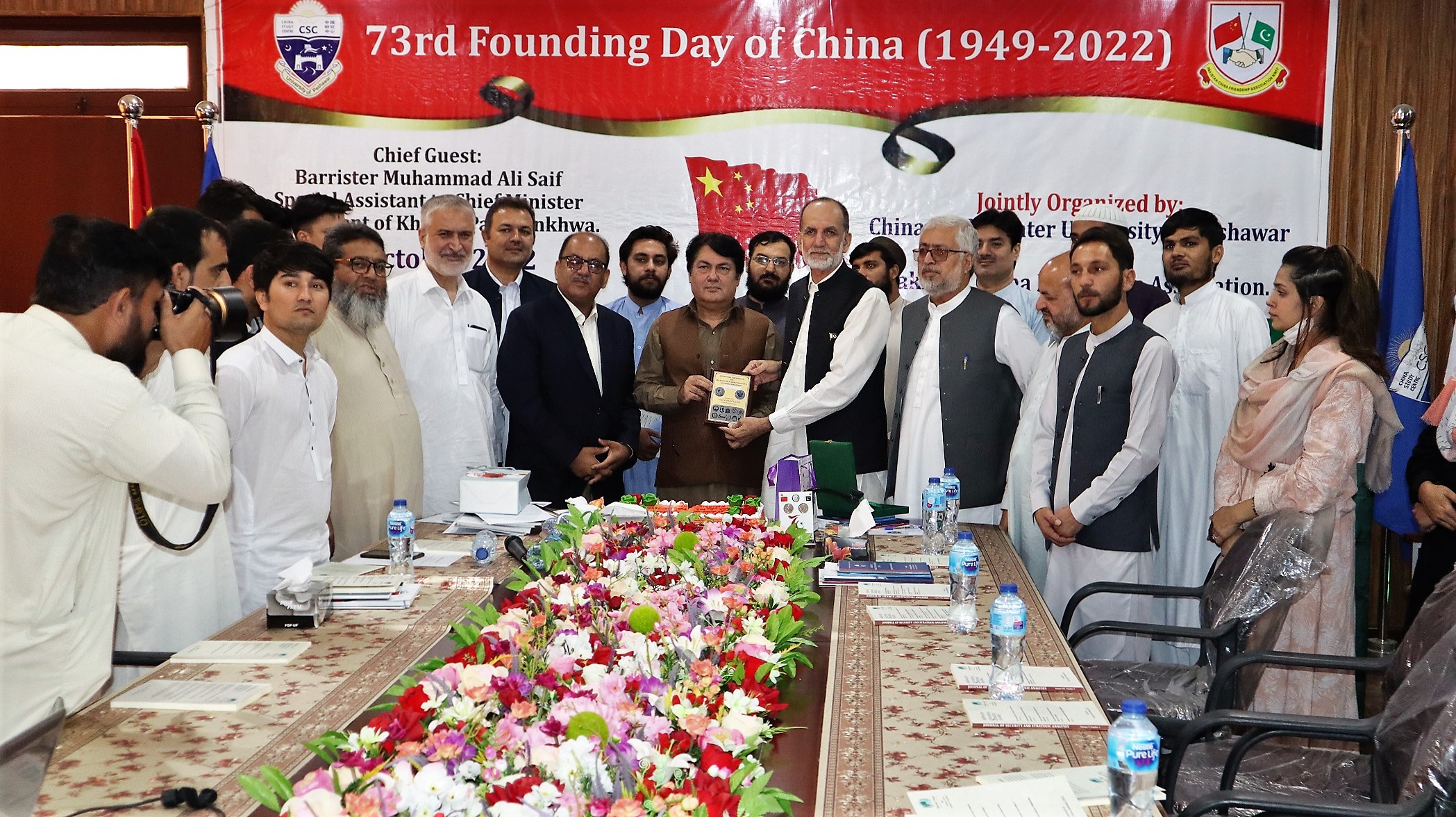 China Study Center, University of Peshawar celebrated 73rd National Day of the People’s Republic of China on 1st October 2022 at the conference hall of the Center. The program started with the recitation of Holy Quran followed by the national anthem of Pakistan and China. Special Assistant to Chief Minister for Information and Public Relations Barrister Muhammad Ali Saif graced the occasion as Chief Guest. Barrister Muhammad Ali Saif has said that the Pak-China friendship is getting stronger. He expressed these views while addressing a cake cutting ceremony to mark 73rd National Day of China at the China Study Center, University of Peshawar.

A large number of officials, pro Vice Chancellors, Deans, experts on China, faculty and students participated in the event.On the Occasion the Chief Guest congratulated Chinese people on their national day and advised students to pay attention to understanding Chinese culture, history and civilization. He said that Pakistan and China has very friendly relations and the young generation should get benefit from this all. He particularly emphasized on galvanizing people to people contacts between the two countries. Prof Dr Zahid Anwar Pro Vice Chancellor and Director China Study Center, University of Peshawar said that the China Study Center, at University of Peshawar was established in 2016 with the cooperation of China Embassy in Pakistan. Since his becoming the Director of the Center, the China Embassy gave several grants for the establishment of CSC, scholarships, equipment and research which was properly distributed among the students , Schools, Centers and departments of the  University.For its excellent performance China Study Center University of Peshawar is the only Center from Khyber Pakhtunkhwa which was selected by the Higher Education Commission of Pakistan and a grant was given to promote its programs. The Center is thankful to both Federal and Provincial Governments, HEC, Vice Chancellor, UoP and last but not the least China Embassy Islamabad for its wholehearted support to China Study Center, University of Peshawar. China Study center has organized more than 300 events on BRI, CPEC, Pakistan China Relations and Regional issues and submitted its reports to the quarter concerned. Mr Sayed Ali Nawaz Gilani General Secretary Pakistan China Friendship Association KP Chapter in his speech said that Pakistan and China Relations have strengthened with passage of time. Syed Ali Nawaz Gilani Secretary-General PCFA & President Radio China Listener’s Club Peshawar while speaking on the occasion said China is now Rising and Shining across the globe due to its systems and a great lesson to learn which is need of the hour. While celebrating 73rd Founding Day of the People’s Republic of China today we should also follow our time tested friendly advices.There are rich opportunities in Khyber Pakhtunkhwa Province to more ahead for socio economic developments. Traditionally the relations with China are very old. Peshawar- Urumqi and Abbottabad-Kashgar are sisters cities since 1985 and 2007 respectively. Provincial Cabinet already approved twining to other cities which soon be finalized and open new chapter of Friendship and we can get benefit from Chinese experience in various fields for mutual interest. He particularly highlighted the role CPC in making China a great economic and political power. After the speech of the Chief Guest the cake cutting ceremony took place which was followed by a group photo and refreshments. In the question answer session it was suggested that to ease trade and strengthen people to people contact flights from Peshawar to Urumqi and Kashgar ( Kashi) should be started.

The Director of the China Study Center thanked the Chief Guest, distinguished speakers and other participants for their sparing time on weekend to come and participate in the Independence Day celebrations of China.

WEBINAR: THE UNFOLDING SITUATION IN KASHMIR AFTER 5TH AUGUST 2019